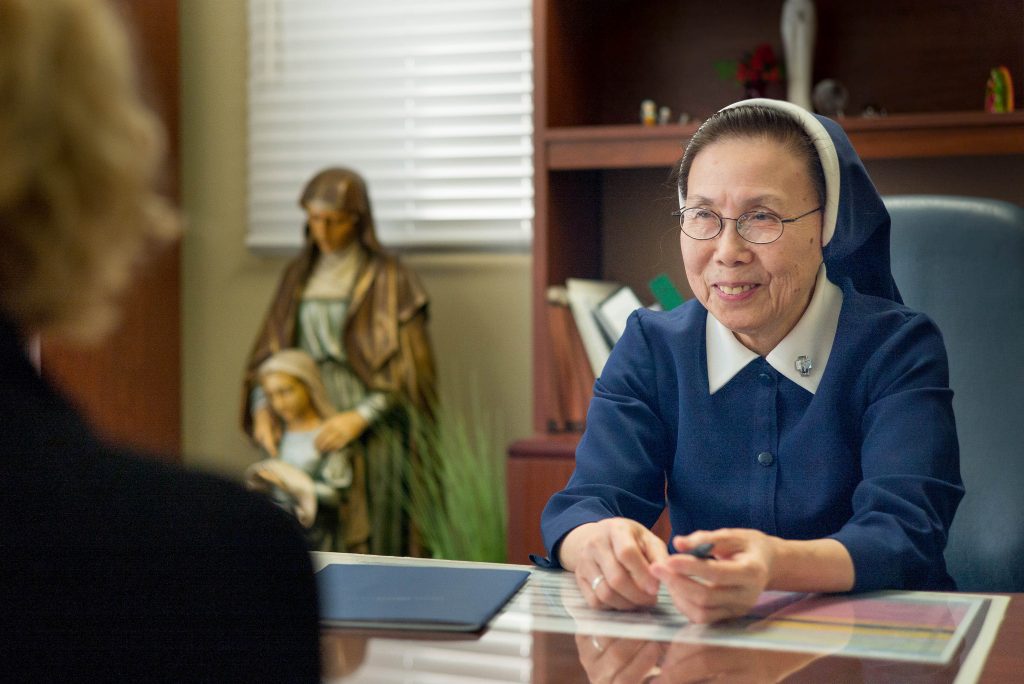 In 2009 Sister Anne Tran returned to Good Shepherd Center, where she served for 17 years, from 1985 to 2002, as Program Director of the Center’s first shelter, Languille Emergency Residence, and as Coordinator of the Mobile Outreach Program.  From 2002 to 2010, Sister Anne served as Superior General of her religious order, the Lovers of the Holy Cross, whose mission is “…to serve the poor and needy, especially women and children….”

After emigrating from Vietnam to the U.S., from 1975 to 1985, Sister Anne was a case worker and counselor in Santa Clara and New York.  She has a Master’s Degree in Social Work from the University of Southern California, a BSW from LaSalle University in Philadelphia, and received her RN degree in Vietnam.

Sister Anne brings the Center years of hands-on experience in social work, and a rich history of administrative leadership.

Elvia Valdes joined the Good Shepherd Center Executive Staff team in January 2017. Elvia graduated from the University of California Los Angeles with a BA in History and Women’s Studies. She has dedicated her life to ending homelessness for women and children by providing basic human needs surrounded by compassion and supportive wrap around services.

She received specialized training in Trauma Informed Care, Harm Reduction, Crisis Intervention and De-escalating Techniques, Motivational Interviewing, Building Community and other training’s relevant to serving the homeless population and survivors of domestic violence. Before accepting the position of Associate Director for Good Shepherd Center, Elvia served as Housing for Health Program Manager at the Downtown Women’s Center. She said that “In our home, we value unconditional love and acceptance. Each chance I get, I try to model and teach my daughters the importance of giving compassion, empathy and dignity to self and others,” values which are in direct alignment with Good Shepherd Center’s motto of serving the homeless with dignity and love.

As the Associate Director of Good Shepherd Center, Elvia oversees all programs, which includes: case management for all residents, community outreach, three shelters-including one for mothers with children, a job placement program, and the Family Services Program. Elvia is bi-lingual (English/Spanish) and loves helping people, qualities which will prove to be of great value in communicating with our homeless population. She is passionate in her mission to end homelessness and has already proven to be a great asset in furthering our mission.

Good Shepherd Center welcomed Adriana Sandoval as Development Director in November 2013.  A native Angelino, Adriana was aware at an early age of the many challenges facing our community and had the desire to make a difference.

Adriana received her B.A. with a Double Major in Communications and American Studies from California State University, Fullerton. She previously served as a Distinguished Events Director with The American Cancer Society and has over 18 years of experience in fundraising and event management.

Adriana oversees the Development Department and is responsible for the overall fundraising strategy of the agency. She works closely with the board to ensure the financial stability of Good Shepherd Center.

Join Our Next Fundraising Event

Give and Change a life forever

Choose Your Amount
Give Now
Stories of Giving
Get Involved!
Success Stories

Add your name below to stay informed

THANK YOU TO OUR PARTNERS

Your Support Makes All that We Do Possible

Become A Volunteer
Go to Top